This story starts without too much fanfare and evolves into a world championship.....

Well after weeks of waking up at 4 in the morning to lay up some micro on the Varna, it has paid off on October 7th 2005. The Varna II, Georgi Georgiev's second Varna speed bike had another world record with Lisa Vetterlein riding it to 66.585 mph.

My streamliner project started a year before. I was looking to obtain a streamliner to race in the HumanPoweredRaceAmerica series. I started building a front wheel drive low racer as a test bed. 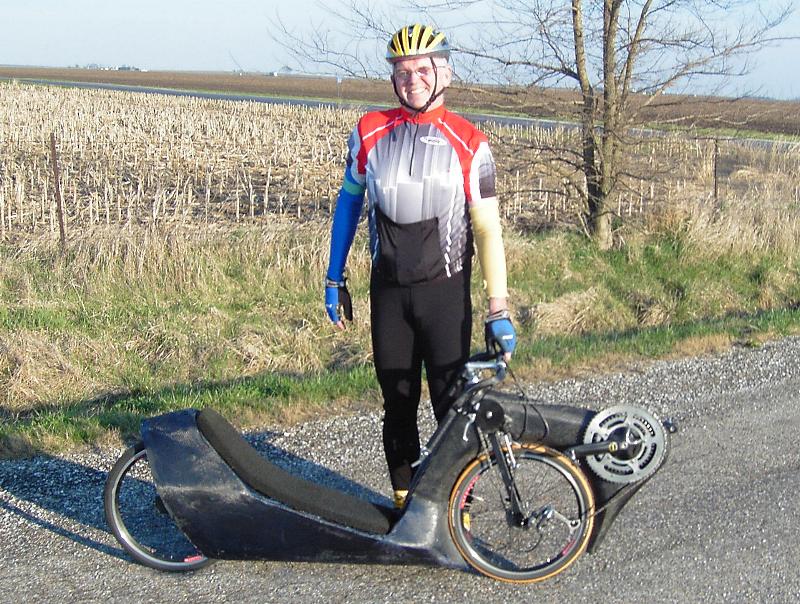 After talking to Sam Whittingham in the winter I found that I could obtain the Varna II. He was coming to a race in the Midwest and didn't want to take the streamliner back to Canada thus needed a buyer. 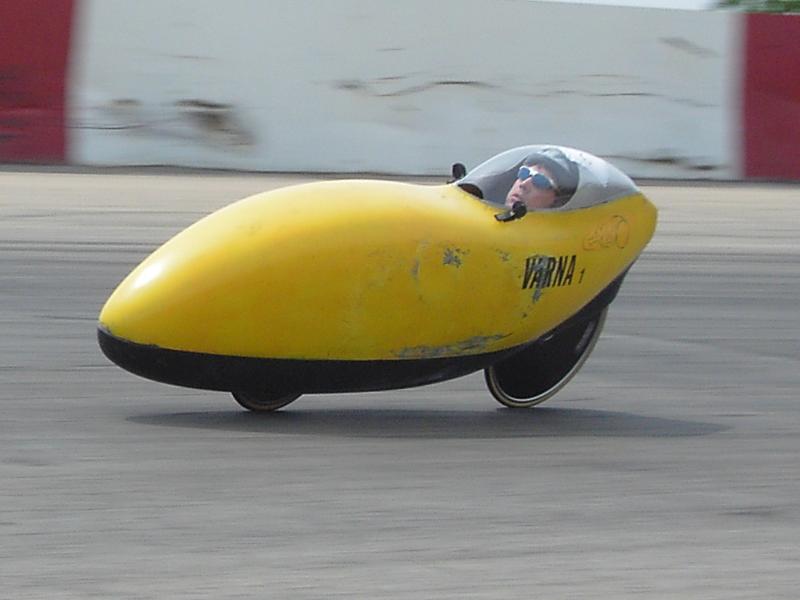 Putting this together, I bought the Varna II, with the hope of having a readymade bike to go to Battle Mountain with. r.

Wanting to go to Battle Mountain I approached my friend and sometimes protégé‚ Dennis Grelk, looking for a rider who could fit into the Varna, It is small inside. His friend, Lisa Vetterlein was having a great year with her road bike cycling and was interested in trying the Varna. Well we had a race team now with lots of work to do. Lisa had never ridden a recumbent bike before.

I met with Lisa and let her ride my Wishbone. After a few minutes I said lets try the Varna. The Varna is most difficult as it had really high gearing and no steering lock to speak of. After watching her crash the Varna (without the top on) for an hour, I got in it and showed her that it was possible. She soon was riding it easily.

The bike needed a lot of work. It had exposed wheels and was dented in on both sides when I bought it. Lisa had a busy race schedule so I started in at working on the bike. I worked mainly on the internals of the bike. Lisa has more leg length than Sam. I had to modify the drivetrain so that she could pedal it without hitting the fairing and without striking the components like the derailleur. After getting that close, I started to work on the lower half of the bike, trying to figure out way of fairing in the wheels to make them look like the newer Varna's, the Diablo, the Mephisto and the Varnoski. I scoured the Internet looking for every photo that I could find. Phone calls to Georgi were helpful as well. He said that fairing in the wheels would add between 3-10 mph at top speed.

By August Lisa was done with her race schedule and wanted to practice on the bike. I would work on it all week, mainly before work. Dennis would drive to my house pick it up on Thursday and take it to our test track about 3 hours away, where Lisa would practice. He would then bring it back and I would work on it till the next session. 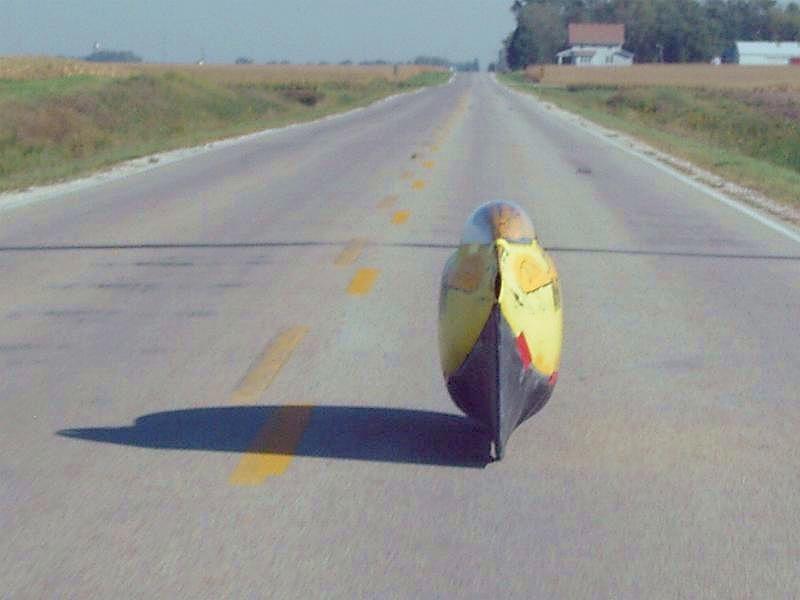 A week before we were leaving for Battle Mountain we decided to do a speed run on an area Time Trial course. Lisa got the bike to 49 mph and we were ecstatic. It still wasn't "done" but was close. Dennis went and made yet another set of handlebars with a different tilt to them. I worked on the shaping the wheel skirts. 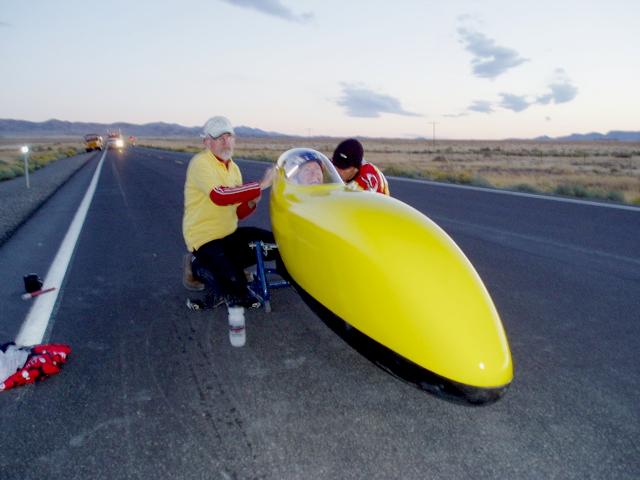 Lisa was fast enough to qualify in the fast flight, the group that ran after sunset. We started last which left us with a near dark finish. Our first night Lisa pedaled to 60 mph Tuesday to 61, Wednesday to 63, Thursday night to 65 and then Friday to 66.585 setting the world record for women. 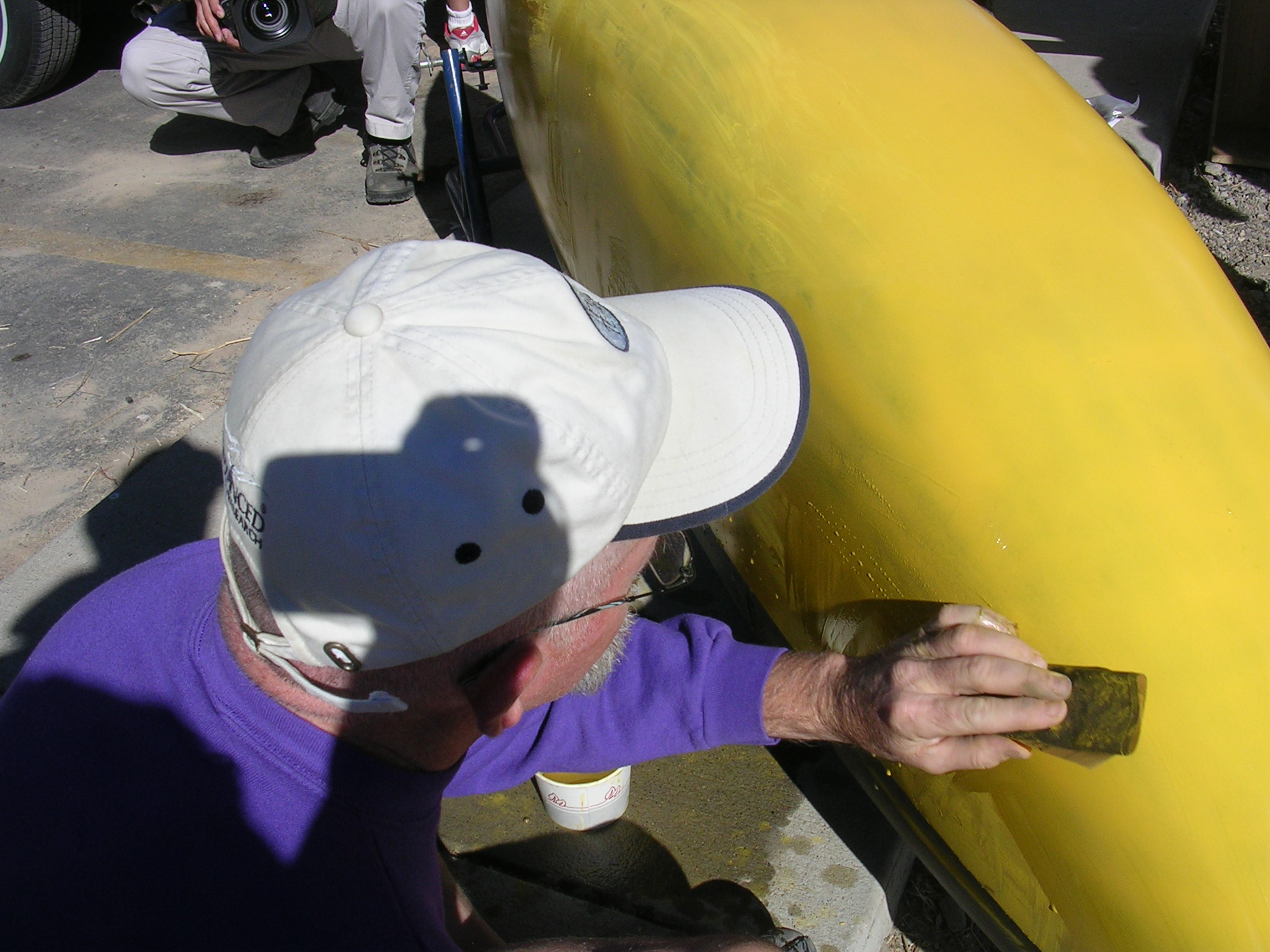 I thought that I was going to do very little while I was there. What a mistake in judgment. I worked every day all day trying to refine the bike. To make it more like the other bikes in competition. My fingertips had no fingerprints on them from sanding. I think it shows that Mr. Georgiev had it very right in 1994 when he built the Varna #2.

Well, I'm finally back from Battle Mountain, Nevada ("Armpit of America"- where new $500 truck wheel bearings can be found in desert dumpsters, if you're willing to dive!) I spent a week out there racing in the World Human Power Speed Challenge. If you have no idea what I'm talking about, or have never seen any photos of this event, check out one or both of the websites below. Jeremy and I caravanned out west with our other crew members, Dave Balfour and Dennis Grelk, five bikes and more tools than you can find in most hardware stores. Dave is the owner of the bike I rode, called the Varna II. He has spent countless hours, sleepless nights, and pounds of skin off his hands repairing and refining the machine in hopes to make it as aerodynamic and fast, and simultaneously safe, as is humanly possible.

The first time I met Dave was in Burlington, IA, during the Memorial Day races, after Snake Alley Criterium, and my road season had just begun. He came to talk to me about Battle Mountain, and to show me the "bike" for which he needed a female rider. I sat in it for a few minutes, and thought, this guy is absolutely insane. It was the most uncomfortable machine I'd ever been in. Wow, how the vehicle and my perspective transformed over the next couple of months. Dave's workmanship on the bike was of professional quality and by the end it rode like a fighter jet. Dennis, while having the official title of team mechanic/wrench/machinist, was also my launcher and great friend. Dennis probably put a few thousand miles on his car driving back and forth, always by my side with unyielding patience (even when I was nearing the end of my rope), as I worked to gain some semblance of control over the Varna. He also with time mastered a perfect launch.

As most of you know, Jeremy has been there for me the entire crazy adventure, starting the day Dave approached me out at Snake Alley, right up to the day we actually broke the women's world speed record. Even after our long road racing season, of much traveling and little time at home, he did not hesitate to express his support and enthusiasm for this new challenge.

Rick Gritters was a source of inspiration and knowledge, as he is an experienced streamliner rider and engineer. Bruno Mombrini, also known as our safety specialist, has extensive experience with just about everything under the sun, came out to Battle Mountain for the entire week and offered his services and support wherever and whenever needed. Daddy dearest, Ted Vetterlein, drove out from California for three days and I was very happy to share the experience with him.

During the lead-up to the event, when I was less than optimistic that I could succeed in this endeavourer, all of these guys had the confidence and faith that I needed to continue. Hands down I was the luckiest rider at Battle Mountain, with a complete bike and a more attentive and supportive team I could have even imagined, and I have to say, I'm sad it's all over. It has been a real privilege. (oh, and I miss my special queen status!)

The lead-up. I've been training on a recumbent bike since beginning of August, the end of our road season. To get accustomed to the Varna, Dave, Dennis, Jer and I (or some combination of the crew) have gotten together at various locations to work on fitting and for me its been just learning little by little to handle the bike, with and without the lid attached. While Dave and Dennis were moving and reconstructing the seat, the handlebars, the derailleur and gearing, the entire outside lower body of the bike, and on and on..., I was trying to get my mind and body accustomed to a new form of riding. (yes, I think they had the tougher job!) The last practice run before heading out to Nevada was at Elkhart, IA, where we achieved 48.8 mph, my top speed yet, on a clear Sunday morning. We had our full team there, plus Rick, and I think everyone felt we were finally ready!

A bit about the race for those who weren't there. Every day was a similar routine; we had a new opportunity to improve our time on the exact same course, and the guys did everything they could to the bike to smooth out any flaws, bumps or scratches acquired the day before. Actually, we only had one start fumble, scratching up the side, which happened to be the same day they screwed up on the timing, so I guess that was just a free-be practice run. The launch is challenging for two reasons: one, the bike weighs over 50lbs, not including my delicate frame (ha), which takes it up in the 180's, and two, I'm starting in a hard gear, 60-30. Since I can not use my feet or hands for balance, I'm depending on those on the outside to hold me upright and start me going; then once at 5-7 mph, I've got enough speed to keep it upright. Practice was key. After the launch, staying upright isn't really the concern, just pacing myself for the 5 miles and figuring out when to kick it into gear.

The parking lot of our hotel looked like a huge open shop, all the bikes scattered about, with fresh bondo, sheets of sand paper blowing around, a few open beer bottles, and the smell of freshly applied paint. These bikes are a constant work in progress, never quite done. The environment was worlds apart from that of the upright/ wedgie/ diamond world I am used to. People were working side by side with the competition, and at times it felt more like a week-long festival than anything else; folks were happy to be in Battle Mountain and smiles were abundant at all times.

In the evenings we'd head out to the racecourse, a five mile, 4500 ft elevation, relatively flat road in a valley outside of town. We set up camp, I got on a trainer bike (a recumbent stationary bike) to start warming up, and we wait for the sun to set, winds to die down, and race time. It was time to focus, eat chocolate, and for me, enjoy the company of friends. By the fourth day of the racing, our bike was tuned in, it felt smooth and stable and we had a perfect launch, thanks to Dennis, and perfect weather, thanks to the armpit heavens. We improved our time from Tuesday at 60.2 to the record-breaking time of 66.58 mph on Friday.

So, I guess this is just a big THANK YOU to everyone involved, and for having the confidence in me and providing me with this awesome opportunity! As Dennis said, we've got lots to come! Hopefully he will be riding next to me out at Battle Mountain next year on a new streamliner J. Personally, I already miss the Varna II - I'm hooked and hope to go for the hour record sometime in the next year... and who knows what else! 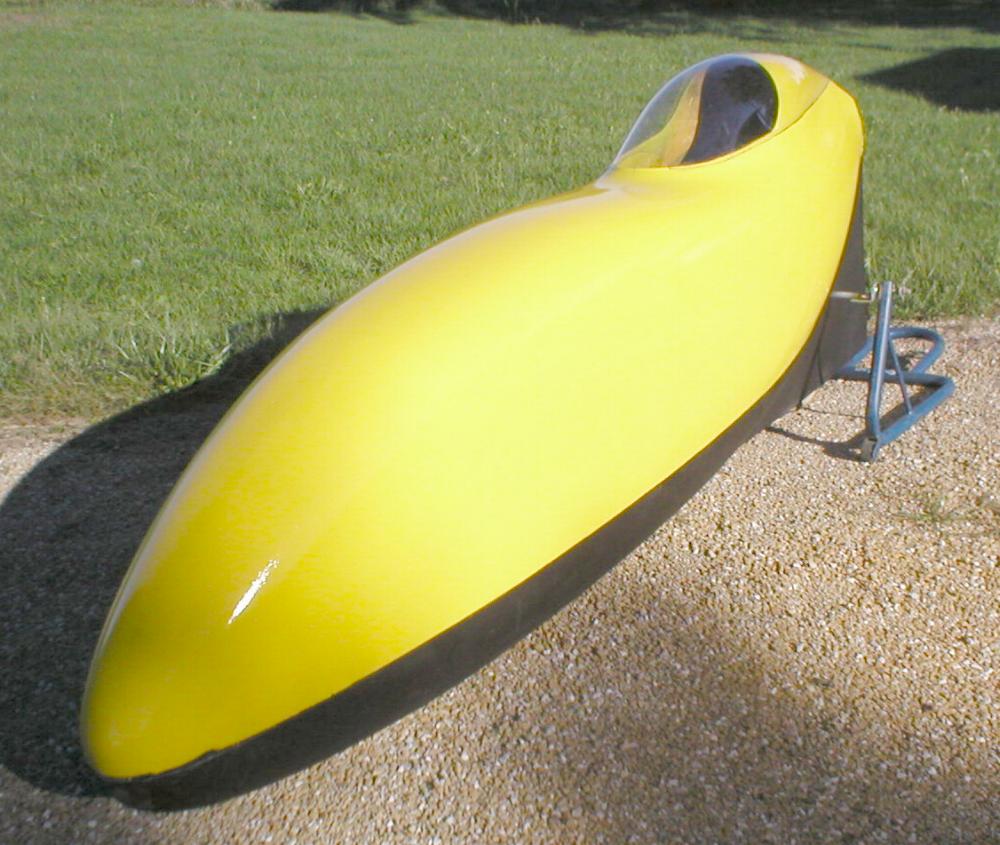 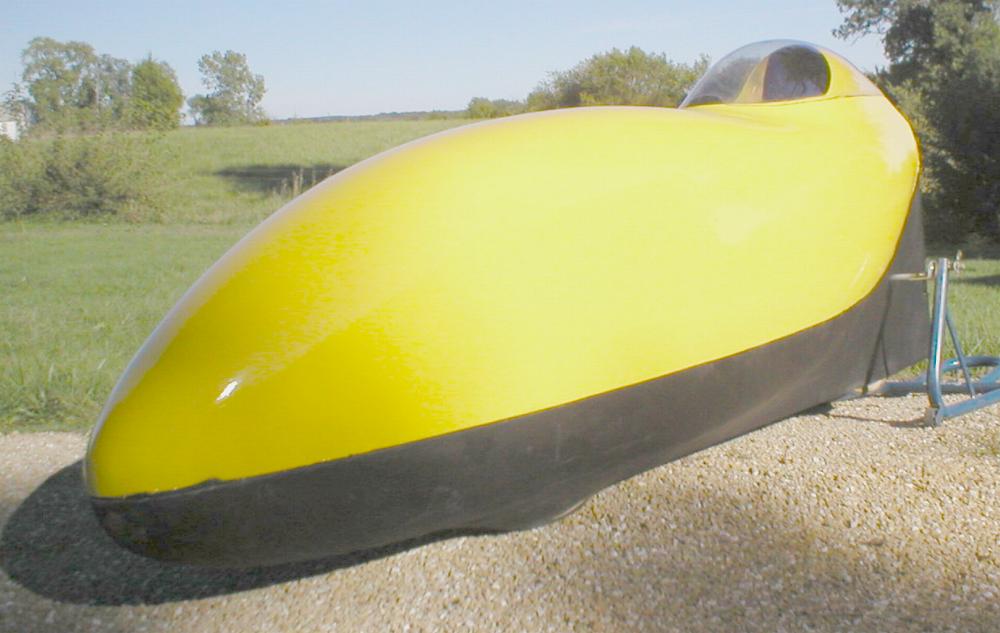